Today, RFC Legislative Director Peggy Birchfield is participating in the release of the fifth annual Department of State Trafficking in Persons Report by Secretary of State Condoleezza Rice. Secretary Rice, along with Ambassador John Miller, the Secretary's Senior Advisor on Trafficking in Persons, will brief the media and Non-Governmental Organizations on the contents of the 150-country report. This year's focus will be on forced labor trafficking. The report's findings are a continued effort to increase global awareness and to encourage all countries to act to stop all forms of human trafficking, which is the second largest criminal industry in the world, after drug dealing. Liberal organizations do not favor trafficking laws because they see prostitution as a "right," believing that women should be allowed to sell their bodies. This is also the prevailing belief in much of Europe, yet it is Third World nations that supply the girls and boys and young women who have been sold into sexual and forced labor slavery. This administration has taken a leadership role in the world, with our State Department, Justice Department, and Department of Health and Human Services actively involved to prosecute traffickers and to help victims.

Earlier this week, the Religious Freedom Coalition participated in a planning and strategy meeting sponsored by the Administration to develop a stronger program to combat human trafficking, which is a form of modern day slavery. Approximately 800,000 to 900,000 victims are annually trafficked across international borders world wide. Victims include homeless and runaway children, children "sold" to traffickers by their parents, as well as young women who mistakenly believe they are being taken to another country to work at a legitimate job. Between 18,000 and 20,000 of those victims are trafficked into the United States and half of those are usually children. Victims are subjected to forced prostitution, sexual exploitation and/or forced labor. Look Beneath the Surface a new project of Rescuing and Restoring Victims of Human Trafficking will be initiated in 2005 to focus on reaching those likely to encounter trafficked victims. New and better methods of detecting, reassuring and rescuing these victims will be developed A year and a half ago, as part of the effort to help identify and assist victims of human trafficking in the United States, the U.S. Department of Health and Human services launched The Campaign to Rescue and Restore Victims of Human Trafficking." This program has been very successful in building a network of concerned non-governmental organizations (NGO's) that are committed to identifying victims of trafficking, rescuing them and assisting them to rebuild their lives. The campaign has identified and assisted more than 717 victims of trafficking in the last year. Better yet, this project has now disseminated more than 700,000 informational packets aimed at raising awareness about trafficking, identifying potential victims and offering resources to help them. More than 450 NGOs have worked as coalition partners to help in this project.

The Religious Freedom Coalition worked very hard to get the Trafficking Victims Protection Act of 2000 passed, making Human Trafficking a Federal crime. Prior to 2000, no law existed to protect victims of trafficking or to prosecute their traffickers. The Trafficking Victims Protection Reauthorization Act of 2003 provided the tools to combat trafficking in persons both worldwide and domestically. HHS has developed materials, videos, hotline numbers and educational training in many languages, and new ways are constantly being developed to enhance this program. Establishing a full community response system to help find and discover and recognize these victims will be the main focus of the Look Beneath the Surface campaign in 2005.

If you think you know of someone who is a victim of human trafficking, please call the special toll-free Trafficking Information and Referral Hotline at 1-888-3737-888.

Jordan is a moderate Islamic nation which supports our war on terror --the White House and the mainstream media will look you straight in the eye and tell you that. In fact, claim the media, Jordan is so moderate that the nation is friendly toward Israel. I have some TV clips from popular soap operas that are produced in Jordan and shown all over the Arab speaking world that I would ask you to view. After watching these grossly anti-Semitic clips showing Jews as pigs you may wonder what the difference is between a "moderate" and an "extremist" Islamic state. Click here to view video clips. The organization that taped and translated the clips, MEMRI, has additional materials you may be interested in.

MORE ON OUR ALLIES

On June 1st a full page story appeared in the Washington Times about Sandy Mitchell, a British citizen who was arrested and tortured by Saudi Arabian police. A hospital worker, Mitchell was accused along with his wife and infant son of furnishing a bomb to terrorists which killed another Brit. The stories of the beatings he endured along with a British doctor are horrifying. Please click here for the full story of Sandy Mitchell's torture and forced confession. In mid May the Saudis ordered jail sentences of between six and nine years to several Saudi "reformers." While the "reformers" hate America and Jews, they want free elections in the Saudi Kingdom. They are now in jail. Click here for full story. Within the last few weeks at least 100 foreign workers who are Christians have been arrested in Saudi Arabia for praying in private, the Boston News reports. Click here for full story.

In the last week, Islamists have set off bombs killing hundreds of civilians in several nations including Indonesia, Pakistan, Afghanistan and Iraq. Meanwhile Oprah is telling her book club fans that Islam and terror are not related and that Mohammed Atta, who was one of the 19 hijack murderers of 9-11, is a nice guy who is misunderstood. She wants us to have compassion for Atta and his family; however there seems to be no mention from her about compassion for his victims. Last September, when Islamic terrorists massacred school children in Beslan, Russia, Oprah refused to have the word "Islam" or Muslim used on her show. Instead she referred to the murderers as "Mountainese terrorists," which I presume means terrorists from the mountains, with no specific religion or cause. Click here for full story. Elsewhere in the United States the "moderate" Islamic group CAIR (Council on Islamic American Relations) started giving away free copies of the Koran as a publicity stunt after the now infamous Newsweek story about a Koran being "mishandled" by the US military. The edition of the Koran CAIR is giving away has been banned from some schools in the United States because commentary contained in it is violently anti-Semitic. Click here for full story. 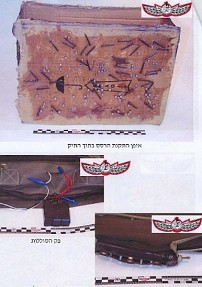 Now that a "moderate" is running the Palestinian Authority, the violence in Israel has ended-- or at least that is the line from the mainstream media and the White House. President Bush is so impressed with the new leadership that he has pledged another $50 million to the Palestinian Authority. MEANWHILE: three suicide bombing runs have been stopped by the Israeli Defense Force in the last week. At left is a photo of a bomb in a suitcase that was to have been detonated in Jerusalem on Thursday. Islamic Jihad had planned on a double suicide bombing, but the perpetrators were caught before they could strap on their bombs. Click here or on bomb picture for the full story in the Jerusalem Post .

Thinking back to my meeting with Prime Minister Ariel Sharon last week, his comment that "Treaties are between leaders, not peoples" has been haunting me. It does not matter what treaties Israel or the United States have with Islamic nations if the schools and the media continue to teach hatred of America, Israel and the Jews. The video clips from MEMRI above will make the hair on the back of your head stand up. Islamic media, even in "moderate" nations continue to accuse the CIA and American Jews of the 9-11 Jihad attack against New York and Virginia. (Yes, the Pentagon is in Virginia, not Washington, DC) Furthermore, "moderate" Islamic groups in the United States continue to defend Jihad and even proclaim their goal as establishing Sharia or Islamic law in this nation. The treaties and agreements we have with Islamic nations such as Saudi Arabia, Jordan and Egypt are worthless and our sale of advanced military hardware to them is reminiscent of the sales of arms to Japan prior to WW II.

Please help Christians under Palestinian Authority control by buying handmade olive oil soap made in Samaria. The funds from the sale of the soap is sent to the families of men who are under death warrants from the PA and HAMAS. The soap is not made in a factory, it is made in the homes of the families who will benefit from its sale. This is wonderful soap that I use at home and is now just $3.95 per bar! To learn more about this handmade olive oil soap click here or on the image.

We really need help this month with funding for our projects both on Capitol Hill and internationally. Please consider at least a small gift to the Religious Freedom Coalition this week. A secure donation link is located at: http://www.rfcnet.org/donate.html.