President George W. Bush commemorated victory over the National Socialist armies of Germany and the other Axis powers this past week. He traveled not only to Moscow, but to the capitals of two former nations enslaved under Soviet Socialist rule from the end of World War II until the late 1990s. In the capital of Georgia the crowds crossed through police barriers to get closer to the President. The peoples of the nations of Eastern Europe still remember what it was like to suffer under one party socialist rule. They still remember the starvation and the human rights violations. Unfortunately the nations of Western Europe including France have already forgotten what the yoke of slavery felt like. France, Germany and the European Union stand against President Bush's efforts to bring freedom to the people of the Middle East. France in particular is far more interested in selling arms to kings and dictators than spreading the God given right of liberty to the enslaved people of the world. (Click here for White House details)

On Thursday a federal judge, appointed by President Bill Clinton, overturned an amendment to the Nebraska constitution which stated that marriage was exclusive to one man and one woman. This amendment to the Nebraska constitution was enacted by 70% of the voters of that state and one Clinton appointed judge has decided otherwise. Meanwhile Senator Sam Brownback (R-KS) is withdrawing his Amendment to the U.S. Constitution after being brow beaten by social conservative leaders at a meeting on Wednesday who did not like his wording. There is no hope in the Supreme Court which is for at least the moment pro-Gay. If marriage is going to be protected as an institution President Bush must step forward and lead the nation. Anything less, anyone less just will not be able to get the job done. (Click here for CNS story)

The stronger the faith of a born-again Christian the more likely it is that person will become a target of the Democrat Party. Majority Leader Tom DeLay (R-TX) has taken dozens of foster children into his home and raised them as his own. We are not talking about new born babies, but children of all ages including troubled teens. During the Cold War he helped Jewish "Refuseniks" escape ethnic and religious persecution in the Soviet Union. Knowing this you can imagine my surprise when I had to push my way through loony left protesters on Thursday to attend a dinner honoring Tom DeLay. The biggest banner read, "Give to the needy, not the greedy." Tom DeLay greedy? This is the man who helped engineer the plan to take millions of people off of welfare and put them back into the workforce. This is the man who has stood up to defend the human rights of people, including the unborn. This is a man who has spent his own time and money helping to build centers for foster care and to furnish clean water to the thirsty. This is the man who leads the House Bible study and gives of himself constantly to the body of Christ. My conclusions: The only thing the left understands is hate. They don't care to look at anyone who disagrees with them as even being a human being. The cat calls full of lies and the banners full of hate reflected the current state of the once proud Democrat party, a party that was once about ideas and now is devoid of even human feeling. (Click here for Washington Times story)

Congressman Todd Akin(R-MO) will again be introducing the Pledge Protection Act this week. The bill would remove the issue of the Pledge's constitutionality from the jurisdiction of the federal courts. The Pledge Protection Act of 2005 contains the same language of that passed in the 108th Congress with a margin of 247-173 with the exception of a new addition. The new addition to the bill will explicitly exempt local territorial courts. The bill would prevent all courts, even the Supreme Court of the United States, from ruling on the legality of the words "under God" in the Pledge of Allegiance. Arguing that it is unconstitutional to recite the Pledge of Allegiance in public in public schools, Atheist Michael Newdow has filed numerous suits. The Supreme Court in the 2002 case dismissed Newdow's case because he did not have custody of his daughter. Newdow has continued his crusade against the Pledge of Allegiance. Congress needs to act to save the constitutional rights of our children to voice there allegiance. The bill is supported by most Catholic, Jewish and Protestant leaders. The Religious Freedom Coalition has supported the Pledge Protection Act and continues to work to see that it passes through the House. Please contact your Congressman and ask them to be a co-sponsor of this bill.

RFC's staff was participating in a briefing on Capitol Hill Wednesday when the emergency alarms went off and officers stormed down the hallways yelling at staff, members and anyone inside the U.S. Capitol to leave immediately. Sounds of screaming policemen armed with rifles, "MOVE, MOVE, MOVE!! Do not walk—RUN. Get out of the building FAST!!" Dozens of people hurried out and down the streets. Not ever experiencing this type of emergency evacuation gave the staff an uneasy feeling. The emergency evacuation of the Supreme Court, U.S. Capitol and the White House took place after a small plane entered the restricted air space of Washington DC. The staff could see two F16 planes surrounding a small plane on either side as if they were escorting the small engine plane away, later finding out that indeed this was the case. Helicopters continued to fly very low to the area giving an eerie feeling for the next few hours. Attending a private meeting with the new Attorney General Albert Gonzales shortly after the scare he stated, "These types of measures are important; terrorism is our number one priority. All threats and any threat should be taken with precaution." The Attorney General spoke of his concerns and priorities: Gun Crimes, Obscenity issues and Human Trafficking. The fight for terrorism continues as many people complained of being inconvenienced or not being told first. Who cares, the evacuation went about as smoothly as one could, with no one hurt except for one congresswoman who lost her high heels and had to finish a press conference on the sidewalk.

RFC IN THE NEWS

I was quoted several times in a FOX NEWS Internet article on freedom of speech from the pulpit. The article centered around HR235 which was introduced several sessions ago by Congressman Walter Jones (R-NC) to return the right of free speech to the pulpit. Unfortunately the language of the bill was changed in this session of Congress to accommodate critics to the point of it being virtually worthless. As a result the Religious Freedom Coalition has withdrawn its support from the bill until such time as the original language is reinstated. (Click here for FOX story)

Comments I made with regard to the EU and its relationship with Islamic nations was reported this past week in Agapa Press. As anti-Semitism rises in France and other EU nations, condemnation of Islamic terror seems to drop. (Click here for Agape Press story)

ABORTION AND THE HELSINKI COMMISSION

Ms. Julie Finley has been nominated by President Bush to serve as U.S. Ambassador to the Organization for Security and Cooperation in Europe (OSCE). The OSCE engages in setting standards in fields including human rights and humanitarian concerns including gender issues, military security and economic and environmental cooperation. Its efforts to advance policy issues relating to women need to be that which are inconsistent with the Administration's policy. Unfortunately, Ms. Finley is a strong pro-abortion advocate. She serves on the advisory board of the Republican Coalition for Choice, which goals are to remove the pro-life plank from the Republican National Platform. She also is a founding member of the WISH list. The WISH list is a Political Action Committee that has raised thousands of dollars for pro-abortion and pro-choice republican women candidates. The U.S. Ambassador to the OSCE must be willing to stand firm against efforts to advance policies relating to women such as abortion, religious freedom, human trafficking and economic issues. Her history of supporting and promoting abortion policies and choices does not make her a suitable candidate for this position. RFC will continue to work to ask the President to put forward a suitable candidate for this position, a candidate that can stand strong for this Administration's and RFC's pro-life agenda. 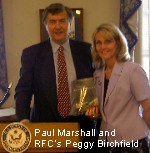 RFC staff participated in a briefing on Capitol Hill featuring Dr. Paul Marshall, Senior Fellow at Freedom House's Center for Religious Freedom.  The event highlighted the release of a new book edited by Dr. Marshall, entitled Radical Islam's Rules: The Worldwide Spread of Extreme Sharia Law.  The extreme form of Sharia that seems to proliferate these days (i.e. the Taliban) is much different than the popular religious application of Sharia as the right "path".  Since 1979, extreme Sharia has spread from Saudi Arabia and Iran to many other nations, primarily in the Arab world.  Democracy and Islam are not necessarily contrary, as 75% of Muslims (non-Arab) live in democratic societies (albeit of varying degrees).  We must support moderate Muslims in their efforts against the spread of Sharia – as especially funded and propagated by Wahabbi interests – particularly through translations of democratic and moderate literature into Arabic.  We should also ensure that foreign policy officials are properly educated.

IRAN AND THE BOMB

Our good friend Jerry Corsi will begin his Iran Liberty Walk on Monday, May 16, 2005 at the Liberty Bell in Philadelphia, Pennsylvania to a replica placed in the heart of Washington, DC. The walk for Iran's Freedom will take about 19 days to cover the 206 miles from Philadelphia, PA to Washington, DC. Jerry and others will be walking to bring awareness to the Religious Persecution, social, political and economic situation in Iran and will urge Americans to reach out to this oppressed community. Jerry's new book Atomic Iran uses inside information from the Iranian resistance about the nuclear capacities of the Iranian Mullahs. The book, Atomic Iran, is currently available at our bookstore. If you wish to participate in the walk please e-mail us at events@rfcnet.org.

Our patriotic ties have been discounted for Memorial Day . Our custom made patriotic ties are now just $10.95 each! The Religious Freedom Coalition also has a variety of other patriotic men's ties and ladies patriotic scarves available for Memorial Day and Independence Day. Proceeds from sales at our Internet store are used to promote our advocacy work on Capitol Hill. Please shop at our Internet store for a variety of items.

A secure donation link is located at: http://www.rfcnet.org/donate.html