HOUSE AND SENATE IN RECESS

The battle has ended and the Culture of Death has won a battle in the courts of America. George Selos, the attorney who successfully argued on behalf of Terri's husband to have her feeding tube removed, now travels the nation charging $15,000 per speech to promote the "right to die." The doctor hired by Michael Schiavo, Dr. Ronald Cranford, refers to himself as "Dr. Humane Death" and was one of the authors of Intended Death: The Ethics of Assisted Suicide and Euthanasia. While many prayed for Terri's recovery there were those on the darker side that wanted to use her case to promote euthanasia. The same people who promote euthanasia are normally those supporting abortion on demand and the cloning of human life to harvest parts. Many believe this case was about Terri and her individual condition but it was not. Those who advocate Euthanasia will now use this case to promote death for others groups such as the chronically ill.The divide in our nation has never been deeper on the issue of life. Our nation needs prayer as never before. 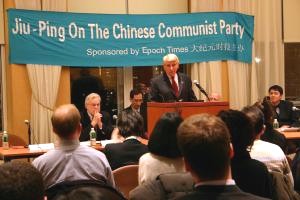 On Tuesday March 29th I participated in a forum on the Chinese Communist Party at the Press Club in New York City that was attended by more than 100 people including members of the media. The forum centered on the Jiuping, or Nine Commentaries, which have been circulating throughout China and have caused the resignation of more than 500,000 members of the Chinese Communist Party. Please understand this: the Chinese Communist Party is actually a fascist organization and is no more communist than the Republican Party. This group of fascists in China abandoned communism decades ago and have used the free enterprise system to enhance their military power and to continue to strangle the freedoms of the Chinese people. To read my statement at the New York Press Club click here.

Yesterday, March 31, 2005, it was disclosed in a report to President George W. Bush that our intelligence agencies have no idea who has weapons of mass destruction (WMD) or if they have the ability to strike with them against America soil. (read article here) For many weeks I have been working with Jerry Corsi, the author of Unfit For Command, and Iranian resistance leaders he knows, to bring the Iranian nuclear threat to the attention of Congress. Corsi has even written a new book, Atomic Iran, about the subject. I wrote one of the forwards of Atomic Iran. Jerry's book exposes how the core deficit of religious freedom in Iran has led to tyranny. The tyrannical mullahs now have nuclear capacity which they are willing to use to spread their intolerant brand of enforced religious beliefs. Corsi gives vivid details of the nuclear disaster that could result inside the borders of the United States. I urge you to obtain a copy of Atomic Iran which is available at our Internet store.

Within a few days a Religious Freedom Coalition delegation leaves on a mission trip to Samaria (the West Bank). Our original goal was to raise some $100,000 for Christian schools, organizations and families living in Palestinian Authority controlled areas. We are praying to hit the $30,000 mark or about 1/3 of our original goal. I have been working with ministries in the Holy Land for more than two decades and I have always found it hard to raise funds for ministry work there. The RFC is not a charity; it is a religious organization and as such we can and do discriminate. In Israel and the West Bank we help only Christian institutions and families. Contributions to our West Bank (Samaria) projects can be made using our online secure server. Our mailing address is at the bottom of the page. Please give credit card donations online at: http://www.rfcnet.org/donate.html.